A Literary Analysis of My Own Book, Part 2

In last week's post I discussed conflict in literature and took a look at Amelia's Children through that analytical lens. This week I'll be analyzing the various conflicts in Primogénito: The Fuentes Legacy. 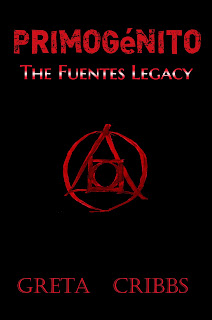 I won't recap the four types of conflict I'll be discussing, since I already laid all that out last week. Let's just get directly into the book.

Man vs. Man
Just like in Amelia's Children, the majority of the Man vs. Man conflict in Primogénito comes toward the end of the story. Again, I won't give away any spoilers, but the whole book is about Damian trying to free himself and the people he cares about from the dark magic wielded by his grandfather and uncles. So, naturally, there's a big showdown at the end where he faces off against the bad guys. Jenn, his wife, and Ashley, his best friend's wife, get in on this action too, as does his father, Leo. It's a big, long, violent sequence of scenes involving lots of fighting and more than a little bloodshed.

Man vs. Nature
I still have the same question as last week: Do the natural workings of one's own body qualify as nature? If so, then Jenn's pregnancy fits into this category. It gives the story a sense of urgency since everything must be accomplished before the baby arrives (because the baby is one of the people Damian is trying to save).

The cold plays a fairly large role in this book. Not to the degree that it alters the course of events, but in the sense that it provides an obstacle which the protagonists must overcome.

Man vs. Self
What character doesn't face this conflict in Primogénito? First there's Damian, who's survived a traumatic event in his past and has worked hard to move on and find his "new normal". When Ashley shows up at his door begging him to help her save her husband, Nick, from and illness she believes is the result of the magic Damian's family practices, it sends Damian down a very dark road. He has to confront his worst memories, his sense of himself, his feelings about his wife, and his feelings about his family, all while working himself to exhaustion trying to help his friend.

Next we have Ashley. She struggles with the same traumatic memories as Damian, but while Damian was the victim of what happened to them in the past, Ashley was merely a witness. So she feels unable to seek support and comfort because Damian deserves those things and, in her mind, she doesn't. What she suffers is a form of survivor's guilt. Though Damian did not die, still he bore the brunt of the traumatic experience while Ashley walked away relative unscathed. Physically at least.

Ashley is also discovering she harbors romantic feelings for Damian. These feelings cause her unspeakable guilt and torment because she's happily married to Nick and Damian is happily married to Jenn. She doesn't want to do anything to destroy the lives the four of them have built for themselves, but nonetheless the feelings are there.

Then we have Jenn. As Damian's wife, her primary conflict stems from her love for Damian and her fear that if he gets involved with his family again after so many years away he will end up hurt. She's also at least somewhat aware of Ashley's feelings for Damian, so some jealousy comes into play. Then Jenn gets pregnant and she is consumed with fear of what will happen if Damian's grandfather finds out about the baby.

Leo is not a POV character in this book, but he is probably the most tragic. As Damian's father, he grew up in the Fuentes family, but tried to leave as a young man. Things did not work out so well for him, but through it all his one goal has been to protect his son. Leo feels everything Damian suffers, almost as though he were going through it himself. And on top of that, he feels unbearable guilt for not saving Damian from the clutches of his family.

Man vs. Society
Not a lot of this in Primogénito. With this book I set out to write an intense character-driven drama with one heck of a creepy mystery thrown in for fun. I was not thinking to make a social statement. Then one reviewer pointed out that Damian's struggle to reclaim his virility and not be defined by his victim status is an example of him trying to live up to society's definition of manhood. I was not thinking that when I wrote it. I felt that the high ideals to which Damian holds himself are self-inflicted and not something being imposed upon him from the outside. But hey, maybe he feels that way because his worldview, including his idea of what it means to be a man, has been influenced by the world in which he grew up. It's a new way of looking at things. I didn't mean to put it in there, but I kind of like it.

Okay, so I've now analyzed conflict in two of my books. I'm having so much fun, I think I'll continue, so stay tuned for next week's look at Road to Yesterday.