My Identity in My Favorite Fictional Universes

Of course I have to start with Harry Potter. Finding our true Hogwarts house is so popular, it's almost replaced Myers-Briggs as the preferred way to define our personalities. And my personality? I'm a Ravenclaw. Reading is my idea of an exciting way to spend a Friday night. I yearned to be the teacher's pet when I was in school. Research is one of my favorite ways to have fun. Put me in a big enough library and you may never see me again. Get me going on a good nerd-talk session and good luck getting me to shut up. Before Harry Potter came along, I just called myself a nerd. Now I say "Ravenclaw". It sounds so much cooler.

The factions in the Divergent books bear a striking similarity to the Hogwarts houses. And if I'm a Ravenclaw in the Potter universe, obviously I'm Erudite in the world of Divergent. I was so disappointed when they turned out to be the bad guys. I mean, come on! Nerds aren't evil. Just because we're quiet and like to keep to ourselves doesn't mean we're plotting the world's destruction. Well, at least most of us aren't.

This was the first fictional universe I identified with. Can you guess who I am? Who is the Ravenclaw on Friends? Ross, probably, and I may have a little bit of him in me (my children say I have his habit of droning on and on when discussing topics nobody else cares about), but in my heart of hearts I'm totally Monica. Okay, I'm not much of a neat freak, but I do have my specific ways of doing things and get very upset if someone messes up my system. I also have an intense phobia of being late to, well, anything, and I'm driven by this obsessive need to be the best at everything.

I'd love to say I'm Leonard. Don't we all want to be Leonard? He's so even tempered and logical and just an all around nice guy. But, alas, I'm nowhere near that well-adjusted. With regard to The Big Bang Theory, I'm really a combination of two characters. Sheldon and Raj. Remember how I said I go on and on about subjects that interest me? One day my kids asked me what a sentence in one of the Harry Potter books meant, and I gave them a full history lesson, beginning with Ancient Egypt and working all the way up to present day. I even drew diagrams on the marker board in my kitchen. It took about twenty minutes to get through all of it. I don't even know if my kids were still listening by the time I was finished. So, yeah, I'd say I have a good bit of Sheldon in me. But I also have a fair degree of social anxiety, which can get pretty intense in certain situations, bearing a strong resemblance to Raj's inability to talk to girls (in the early seasons).

Okay, your turn. Do you know your Hogwarts house? Do you have fictional characters you feel are mirror images of your own personality? Let me know in a comment.

And don't forget that my new book is now available on Instafreebie, so swing by and check it out: https://claims.instafreebie.com/free/oasnYrcL
Posted by Greta Cribbs at 6:48 AM 1 comment:

This post is about a week and a half late. First, I wasn't quite finished with the book when I wanted to be, then when I finished it my internet went out and stayed out for a week. But I'm back to blogging now, and I've got a new indie book of the month to announce. 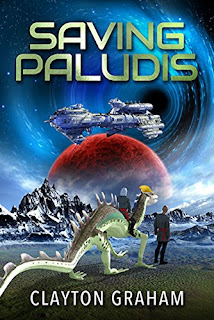 This is the second book I've read by this author, and I must say, he does not disappoint. The writing style was top-notch, the world-building fascinating, and the characters likeable.

And like all good science fiction, it got me thinking about the future of mankind. If you don't mind too much, I think that's where I'll focus my attention in this review.

This book, being futuristic sci-fi, envisions a future in which technology has expanded beyond what we, in our current world, can even imagine. And that technology has had an impact on the culture of the times. There were parts of the book in which I found myself agreeing with the author's vision, and there were parts in which I disagreed. Don't get me wrong. I don't consider the parts I disagreed with to be plot holes. This is a well-thought-out book. It's just that the future can go in many different directions, and the one I picture is, in some areas, a little different from what the author shows us in Saving Paludis.

First of all, I sincerely hope that we have learned enough from our own history to avoid tragic situations like the one that exists on Paludis with regard to relations between the humans and the Muskans. I hope that, should we ever encounter other intelligent life out there in the universe, we can treat it with dignity and respect, rather than seeing an enemy to be conquered. But, of course, we are only human, and humans are flawed by nature, so its highly possible that history could repeat itself.

I also found myself thinking a great deal about the use of technology in everyday life, particularly with regard to nutrition and reproduction. A lot of the sci-fi that came out in the 20th century envisioned a high-tech future, much like the one in this book, in which humanity has removed itself so far from the natural world that people have nearly forgotten how to live naturally. It's understandable that 20th century authors would see the future in that way. After all, it was a century of unprecedented technological advancement. However, in recent years the pendulum seems to be swinging in the opposite direction. Let me explain.

I was a kid in the 80s. I like to joke that 80s kids grew up in a science fiction movie. Our soup came out of a can. Our waffles came from the freezer. We drank Kool-Aid more often than we drank juice. For most of my life I thought I hated ravioli because I had only tasted the canned version. It wasn't until I was in my late twenties that I finally tasted the real thing and realized I actually loved the stuff.

Today, we're a lot more health-conscious than I think a lot of people were back then. We don't want to feed our kids three canned meals a day. We want to provide fresh fruits and vegetables. We intentionally seek out free-range eggs. The locavore movement has spawned it's own counter-culture. I can't help but wonder if this trend will continue as we go forward, with people turning away from technology and toward the natural when it comes to what we put in our mouths.

Likewise, human reproduction. While I don't doubt that many women would choose to avoid the pain of childbirth, I somehow doubt all of womankind would forego the unique experience of getting to carry a child inside their very own bodies. And some women (I was one of these) actually choose the pain of childbirth over the drugs and interventions available today. The natural birth movement is much like the natural food movement. It began as a reaction against some of the unhealthy practices which became popular in the 20th century, like drugging women to the point of unconsciousness and delivering babies with forceps. We took a huge swing in the assisted birth direction, and now the pendulum is moving back the other way. My natural inclination is the see the trend continuing far into the future.

Again, do not misunderstand me. None of this is meant as a critique of the book. Actually, the fact that the book got me pondering all these things is a testament to the quality of storytelling. Saving Paludis is much more than a light-hearted romp through the cosmos. It's a well-drawn book with a level of depth that took me pleasantly by surprise.

If you enjoy futuristic sci-fi, by all means check out this book:  https://www.amazon.com/Saving-Paludis-Clayton-Graham/dp/0994495625/ref=tmm_pap_swatch_0?_encoding=UTF8&qid=&sr=

And if I may end this post with a little shameless self-promo, I've got a new book available on Instafreebie right now, so please take a moment to check it out:  https://claims.instafreebie.com/free/oasnYrcL
Posted by Greta Cribbs at 2:03 PM 1 comment: