The Girls Across the Bay by Emerald O'Brien 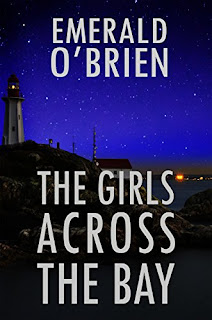 I went back and forth a bit in deciding how to rate this book. Here's the thing: When indie authors read indie books, they fall into two basic types. There's the type who says, "These are my fellow indies! This is my tribe! These are my people! We've got to stick together and support each other!" Then there they type who says, "If just one indie author publishes a bad book, that reflects on all of us. It's up to us to find all the mistakes in all the books and get all the authors to rewrite and re-edit and re-proofread until it's absolutely perfect so no reader will ever again point to a bad indie book and say 'There! That's why I only read traditional books!'"

I won't review indie books if I can't give them at least four stars, but I've been known to come down to four from five for things like typos or details that are just slightly off. Things many readers tend to ignore. I can't ignore them. And if there are grammar mistakes...well, I can be a bit pedantic in that regard. I've always been this way, and I annoyed many of my friends when I was in school because I was always correcting their speech.

So with The Girls Across the Bay, it was a given that it was getting at least four stars. Like I said, I won't read indie books if I can't give them that much. But the question of four or five plagued me right up until the end.

I've finally decided on five stars because I realized that the little things I was getting hung up on while reading it were truly little things. When I stepped back and looked at the big picture, what I found was an engaging story with likeable characters set in a beautiful location. What more could I want?

Yes, I thought Mac was a little too crotchety to be believed, but Grace and Madigan were beautifully written, as were Evette and John. Yes, I felt that some aspects of the police investigation were glossed over and parts of it seemed rushed, but I was compelled to keep reading because I needed to know all the connections between the characters. The personal drama between the two main characters and their former foster family made the book a page-turner for me, and the way it all came together at the end was fantastic.

The author did a wonderful job of weaving the backstory into the narrative. Some data dumps are inevitable when writing a story in this way, but this book managed to avoid having too many of them. And when I did come across one in the course of reading, I was intrigued rather than annoyed. Finally, I was getting some answers! And because they were spread throughout the book rather than all being clustered together at the beginning, there was plenty of time to become engrossed in the story before getting plunged into stuff that happened in the past.

I would recommend this book to anyone who likes to read murder mysteries.