The Craziest Thing I Learned When I Self-Published My Book 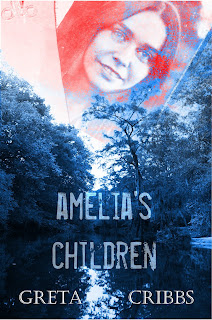 There she is, my big beautiful book cover in all of her spooky blue glory.  If you are interested in learning about my adventures in graphic design, you can read my previous blog posts,
My Review of Gimp Photo Editing Software and How To Tint a Photo in Gimp 2.8.  Today's post is mainly concerned with the process of formatting my Microsoft Word file for Amazon Kindle.  But before we get to that...

I would love for you to pop over to Amazon and check out Amelia's Children.  It is a paranormal mystery (coming out just in time for Halloween) about a young waitress who meets a handsome stranger who comes into her restaurant one night while she's working the evening shift.  At first her connection to him is only an infatuation, but as time wears on she is pulled into helping him solve the mystery that has haunted him his entire life--a mystery that somehow revolves around a thirty year old unsolved murder.

Okay, I think that's enough shameless self-promotion, don't you?  On to the business at hand.  First let me say that I could probably write an entire book on what I learned about the self-publishing process.  If you have been through it, you know what I mean.  If you are a writer who is considering self-publishing your first eBook, there are numerous resources you can use to help you with formatting.  Here are links to a couple of them:

I am not prepared to offer my own advice in this area, because I have only been through the process once and still have some things to learn.  The purpose of this post is to share my reaction to the things that I did learn.  Okay, actually I'm only going to talk about one thing.  I feel the need to dedicate an entire blog post to it because it absolutely blew my mind when I found it out.  I do not exaggerate.  It literally took everything I thought I knew and turned it on its head.  Okay, maybe it's not quite as traumatic as questioning my beliefs about God, or wondering if my parents are really my parents, or anything like that.  I guess in the grand scheme of things this was really a very minor discovery, but I'm still reeling from it just the same.  What is it?  Let's backtrack a little first.

My Humble Beginnings As a Writer

I wrote my first poem when I was nine years old, and I wrote it on my grandmother's typewriter.  In the late eighties there were still many people who did not own a computer, and even those who did still often used typewriters for professional writing because, well, printers pretty much sucked back then.  I started writing my first novel at the age of eleven.  While this early version had some obvious hallmarks of a young inexperienced writer, I am planning at some point to rewrite it and publish a good version...one day.

I began writing that book by hand because I did not own my own typewriter at that point.  Then for Christmas that year my parents gave me one and the book started coming together faster than I had ever dreamed possible.  Because I was dead set on pursuing writing as a career, I decided to take keyboarding as an elective at school.

I think the year was 1990.  Though, again, computers existed, I guess supplying them to a sixth grade typing class was not in the school's budget, so we used typewriters instead.  Of course we didn't even have the newest typewriters available.  The one I had at home had an auto-center button on it for centering titles, but in class there was no such button, so we learned to center manually.  If you have never done that before and are curious about the process, you can learn it here.  It's a fairly useless bit of knowledge, but it may come in handy if that asteroid ever strikes the earth and wipes out all use of electricity across the entire globe.  Then we'll all be stuck using manual typewriters and will be glad we learned how to center a title.

(Interesting side note here:  it's only when you look at a manual typewriter that you understand the logic behind the naming of the Shift key.)

My high school principal talked me into taking keyboarding my senior year.  I didn't want to.  I had taken that class back in sixth grade and had done a lot of typing since that time.  As far as speed and accuracy were concerned, I was quite good.  The fact that I had never learned to type on a computer did not bother me.  But I took the class anyway because when your principal calls you on the phone to express his alarm that your high school transcript does not include a typing class, you follow his advice.

It was now 1996, and the school had real computers for students to use.  Of course, they were still outdated.  If I remember correctly, the ones we had in that keyboarding class were pre-Windows, so there was a lot of use of F-keys and arrow buttons.  I was adamantly trying to assert my anti-technology identity, so it was only very begrudgingly that I admitted that computers were easier to use than typewriters.  Even factoring in the necessity of using F-keys and arrow buttons, computers made everything much more convenient.  But some things remained the same, like indenting the first line of a paragraph.  Setting the Tabs on a computer was a different process from setting them on a typewriter, but once they were set the actual act of typing was pretty much identical.  So this was the second typing class I took in which I learned that the proper way to indent a line is by pressing the Tab key.

If you came up through the ranks of "old-school" typing classes like I did, and have now learned to use the newest methods, then you already know where I'm going with this.  What I learned, and I read it on numerous websites as I was researching how to format my book, is that you should never, ever use the Tab key to indent the first line of a paragraph.  What?!?  You mean the process I learned in my first ever typing class--and then again in my high school keyboarding class--is not the correct way to do it?  That thing that I have done so many times it is now permanently imprinted on my brain is something that I have to stop doing?  I even read one tutorial in which it was described as a "bad habit."  Seriously?  That's like saying using your hands to knead dough instead of using the dough hook of a food processor is a bad habit.  Not it's not!  It's the way its been done for...well...as long as such things have been done.  Bad habit?  I think not.

Okay, I'm done ranting and raving about it now.  Basically what I learned (from the tutorials and, thankfully, not from personal experience) is that apparently the software that takes the file containing your manuscript and converts it to an eBook does not recognize Tab indents.  As I said, I have not tested this.  I simply trusted the experts to know what they were talking about, and a huge part of the formatting process for my book involved getting rid of all Tab indents.  Which in reality meant every single indent in every single paragraph in my book.  Thankfully, it's very easy to find them and then abolish them all at once.  It was not a tedious process.  Learning to type without the use of the Tab key--now that's going to be a grueling experience.

That was the most surprising thing I learned when I published my book.  I'm sure other people have been surprised by the experience as well.  If you have similar stories about things you learned in the formatting process, I would love for you to leave a comment.

Don't forget to follow me on Twitter for updates on this blog and all of my other projects.  And if you're looking for a good paranormal mystery to get you in the mood for Halloween, check out Amelia's Children, now available on Amazon Kindle.
Posted by Greta Cribbs at 7:28 AM