Will the Perfect Television Show Ever Exist?

The truth is there is no such thing as the "perfect television show".  Why?  Because everyone has a different definition of "perfect".  Here's an example.  A few years ago I discovered the show The Incredible Hulk.  I remember this series existing when I was a child in the 80s, but I always thought it looked stupid and never watched it.  Then I saw a rerun of it one day and realized I had really missed a good program.  It had a number of my requirements for the "perfect show" (which I will describe later in the post) and I was hooked right away.  But my requirements for perfection are not the same as someone else's requirements.  In fact, what I liked about The Incredible Hulk actually turned some people off.  I know this because of a conversation I had with a friend one day.

It was one of those conversations where you're just sitting and relaxing and talking about everything and nothing, and I happened to mention that I had discovered The Incredible Hulk and was amazed that I had never given it a chance before because it was so good.  I mentioned that the thing that drew me to it was the main character's vulnerability, at which point my friend said, "Oh I hated that about that show.  All he does in every episode is whine."  Well, there you have it.  The reason the perfect show will never exist.  If it has everything necessary to make me absolutely love it, someone else will hate it for those very same reasons.  So what are my criteria?

When it comes to who we find attractive, we all have a type right?  I certainly do.  I go for the tall, dark, and handsome ones.  The lead actor in my perfect TV show would have to fit that description.  He would need to look like...hmm...Eduardo Noriega would be a good example of my "type". 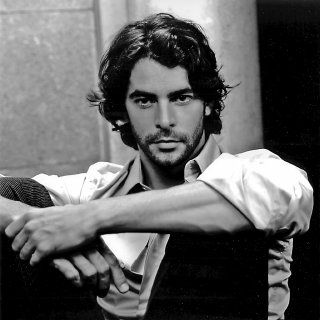 Mmm...Eduardo Noriega...Oh...What was I saying?  Oh yeah, leading actor.  Well he doesn't have to be my type, physically, for me to like his character, but we're talking perfect here, right?  So he would have to look perfect.  My definition of perfect.

A Bit of a Creep Factor

I like creepy stories.  I don't know why.  I just do, and I always have.  I remember when Lost first aired, my husband wanted to watch it, but I was uninterested.  I thought it was just going to be about a group of people trying to survive a plane crash.  I imagined it being a show that focused on the politics of survival in a hostile environment, with arguments about food and shelter and where to go and how to get rescued.  Those things definitely are a part of the story of Lost, but of course there is so much more to the series than that.  It was the episode "Numbers" that made me realize that the show was about a good bit more than just survival.  The creepy atmosphere of that episode hooked me, and afterward I tuned in faithfully every week.  My perfect show would have to be a little bit creepy and mysterious.

I've already described his appearance, but what's his story?  Who is he, and what's going to make me like him?  Well, I've already mentioned it.  Vulnerability.  He must have a vulnerable side.  Not that I want him to be a wimp.  I mean, he should be able to kick some butt every now and then, but there has to be some weakness there.  In fact, I have a pretty specific idea of exactly how vulnerable he is and why.

I know I am not alone in wanting a vulnerable main character, because these characters are constantly making appearances on television.  The Incredible Hulk, of course, is an example.  Fox Mulder on The X Files is another strong male lead who happens to have a vulnerable side.  But I seldom see a character with my idea of the perfect level of vulnerability.  So what is that perfect level?

I've written in a previous post that my favorite seasons of Supernatural are the first two.  This is because the first two seasons fit more of my criteria than the later seasons do.  The show was creepier then than it is now, but the characters' storylines also fit almost perfectly into my criteria in the beginning.  The main thing that hooked me on the show was the story arc involving Sam that lasted for the entire first two seasons.  While Sam and Dean both showed some vulnerability, Sam showed the right kind.  Well at least the right kind for me.  What do I mean?  Let me explain.

The first two seasons were all about Sam.  I mean, yeah, Dean was important too, but all of the bad stuff that was happening was centered on Sam.  He was the one the demon wanted.  He was the one who had to be saved.  But he was also the one who had a special gift.  Remember Sam's psychic powers?  The writers of the show seem to have forgotten about those in recent years.  I miss them.  Explaining why I like that part of the story is hard to put into words, but I'll try.  Sam was special, and I need my leading male character to be special.  He had a gift that was also a curse.  It gave him the ability to do things that others could not do, but it also made him more vulnerable.  Sam had visions, and he could see things before they happened, but those visions weakened him.  He needed to recover from them.  I liked the fact that his strength was also his weakness.

Part of me wishes that Supernatural had continued to be all about Sam, but of course that is not how the story has played out.  There will be one story arc involving Sam, followed by one involving Dean, then another with Sam, and so on.  I know why that is.  People will get tired of everything always being about Sam.  People want Dean to go through some drama as well.  Writing a TV show is about pleasing as many people as possible, so they alternate between characters to give everyone a little of what they want.  Supernatural is not the only show that does this.

I recently started watching Haven, and have seen the same trend.  I must say, in the beginning it was a little difficult for me to get into this show because the main character is a woman.  As I said above, I want to be attracted to the main character, which means I want the story to center on a handsome man.  The fact that the story is pretty much all about Audrey in the beginning kept me from getting pulled in completely.  But it's an interesting show, so I kept watching, and I was not disappointed.

It takes a really long time for any character other than Audrey to get an interesting storyline on this show.  Okay, Nathan goes through some intense stuff fairly early on, but it's a little bit here and a little bit there.  The story doesn't really focus on him.  Then, as the series progresses, we start to get a glimpse of Duke's backstory, and that's what finally hooked me.  It fits my criteria exactly.  The gift that is also a curse.  The strength that is also a weakness.  And by season five...wow.  But still I was left feeling a little bit disappointed.  Why?  Because, again, it's not all about him.  The other characters are still there, and they still have their own drama to go through.  That drama is often completely unrelated to Duke and his struggles.  For a show to be "perfect", it all needs to center on the one character.

Okay, some of you may be asking, "Well, Greta, you call yourself a writer.  Why don't you write that perfect story?"  Well, I guess I kind of did.  And I kind of am.  Amelia's Children, the book I just completed, has all of these elements.  Well, except for the lead actor.  I can't really have that in a book, but I do describe David as looking a bit like my perfect man.  And the story is all about him.  Bad things happen to other people, but David is at the center of it.  And yes, he has a gift that is also a curse.  The new book I'm working on centers around a character named Damian (I seem to like names that start with "D").  Again, bad things happen to other people, but they wouldn't have happened if those people had not been somehow connected to Damian.  And yes, Damian is also described as tall, dark, and handsome.  It feels good to write these stories because I can take all of my frustrations about my favorite movies, books, and TV shows, and deal with them in my own way.  I can write the story the way I think it should have been written.  But occasionally...just every now and then...I would like to see that story written by someone else.  And if it happened on a TV show, I would get to tune in week after week and experience that little emotional release again and again.

If my perfect show exists, and I just haven't found it yet, please leave a comment and let me know about it.  If you have your own ideas of perfection, and they differ from mine, tell me that as well.  I would love to hear from you.


Remember to follow me on Twitter for updates on this blog and other projects I'm working on.
Posted by Greta Cribbs at 4:45 AM